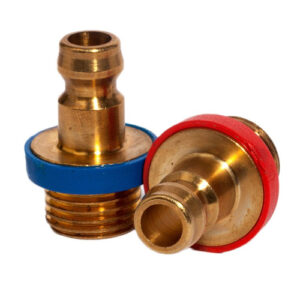 Are you looking for superior quality Mould Quick Release Couplings exporter and suppliers? Get Quick delivery and dispatch available.

Mould couplings are usually used for liquid media at temperatures up to +160 °C. For example, they are used on cooling circuits of injection moulding machines and die-casting equipment. Mould couplings have various connection types: push-in coupling socket, hose barb, threaded, etc. and are available as straight, 90°, or 45°.
Also known as cool-and-line mould couplings, these quick couplings are used to install or remove cooling circuits in the moulds or dies of injection moulding machines and die-casting equipment.

These injection moulding quick release couplings are made of Stainless Steel or brass and have a Viton seal to guarantee resistance to high temperature (up to 200 °C) and to chemicals and working pressure up to over 10 bar.

Mould Quick Release Couplings find use in a variety of industrial applications, including:

about your requirement to select the right products for your application needs!

Do you have any questions or need help with our services and products? Submit an Enquiry Form request or Call us at 9821023876.

Feel free to get in touch!

Note: Please note that the information on this document is for illustration purposes only as information may vary with individual products, their grade and applications industries or uses and therefore cannot be guaranteed as accurate. © Copyright 2020 © Pioneer Industries All Rights Reserved (Terms of Use). Recreation of any materials from the site is strictly prohibited without permission.  Pioneer Industries’ products are sold exclusively through Pioneer Industries’ website. Use Terms | Privacy. Please contact us to discuss precise product specifications and requirements and obtain advice on which products are required to suit your exact application needs inquiry@pioneerfitting.com

Developed & Managed by Vebiotic and Marketed by Adinads
Scroll to Top